Physical Conditions That Cause Anxiety

Menu
<< Back to Free Help

Many physical illnesses can produce nervousness in individuals who are not emotionally troubled. Certain other physical disorders — those discussed in this section — can cause a cluster of symptoms that resemble those of panic.

The predominant cardiovascular disorder that can produce multiple symptoms is hypertension, caused by a narrowing of the arteries. As your heart pumps blood through your body, it exerts a certain amount of pressure on the arterial walls. If these passageways become constricted for some reason, it requires greater force to maintain a steady flow of blood. The entire circulatory system is then under strain, and hypertension is the diagnosis. This, as mentioned earlier, is often a symptomless disease, but you might notice such symptoms as palpitations, nervousness, dizziness, and fatigue, as well as a general sense of ill health.

Mitral valve prolapse is a common condition found in approximately 5 to 15 percent of the adult population. In this disturbance a valve leaflet within the heart balloons into the left upper chamber (the left atrium) of the heart during contraction. About half of all people with mitral valve prolapse will complain of heart palpitation sometime in their life. Other possible symptoms are rapid heartbeat, shortness of breath, dizziness, and an increased awareness of the heart’s action. This is a rather minor cardiac problem, but people can erroneously blame it as the sole cause of panic attacks. More often, though, it is the patient’s fearful preoccupation with the action of his heart that produces panic. You will find a more extensive discussion of mitral valve prolapse in Chapter 6 of the self-help book Don’t Panic. 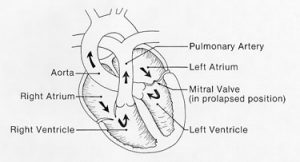 Location of mitral valve and change in appearance after ballooning.

There is growing evidence that hormonal changes can dramatically affect a person’s physical disposition and mood. For instance, approximately 50 percent of women experiencing menopause report some major physical and/or emotional changes. Another 25 percent have uncomfortable, even distressing, symptoms that can include intense moments of palpitations, sweating, hot flashes, and anxiety. Premenstrual syndrome identifies a complex of symptoms, including panic, occurring in the days just before menstruation. You will learn more about premenstrual syndrome in Chapter 5 of the self-help book Don’t Panic.

A third hormonal problem is hyperthyroidism, the overactivity of the thyroid gland. This gland, located in the lower part of the neck, is controlled by a thyroid stimulating hormone produced in the pituitary gland. In hyperthyroidism, the normal control mechanisms are disrupted and the thyroid continues to produce an excessive amount of its own hormone, thyroxine. This overproduction causes a general speeding up of all chemical reactions in the body. The person may feel shaky and anxious, with heart palpitations, breathlessness, and increased perspiration — feeling as though he or she is experiencing a constant anxiety attack. Additional symptoms make this disorder easier to diagnose: increased appetite, but with weight loss instead of gain; thinning hair; chronic tension and a sense of needing to keep moving despite fatigue and physical exhaustion. Instead of feeling cold, as the anxious person might, the person suffering from hyperthyroidism will feel hot, and his skin will be warm to the touch. Your doctor may order a thyroid screening test for you if you have several of these symptoms.

Physicians treat hyperthyroidism in one of three ways: through anti-thyroid medication, by surgically removing either a lump in the thyroid or all the thyroid, or, more commonly, by administration of a radioactive iodine fluid that controls the overactivity of the gland.

Hypoglycemia is the experience of several unpleasant symptoms while there is a lower than normal level of glucose in the bloodstream. This state of low blood sugar generally produces a feeling of being uncomfortable, with cold, clammy skin and profuse sweating. Other symptoms can be dizziness, weakness, trembling, tingling in the lips and hands, palpitations, and fainting. The condition is most often found in diabetics who take insulin. However, many individuals erroneously believe that hypoglycemia is the cause of their panic symptoms and therefore fail to explore other possible diagnoses. For further information on hypoglycemia and panic, see Chapter 5.

The adrenal glands are located on top of each kidney. The adrenal medulla produces two hormones that play an important role in controlling your heart rate and blood pressure: epinephrine (adrenaline) develops within or near an adrenal gland and causes an increase in the production of this hormone. Tachycardia, sweating, anxiety, faintness, nausea and pallor — all resembling panic — can occur as a result of slight exercise, exposure to cold temperatures, or minor emotional upset. Typically the blood pressure will become extremely high, and the patient may have the frightening feeling of being about to die. This extremely rare disorder, called pheochromocytoma, is cured by surgically removing the tumor.

Anemia is the abnormal decrease of either hemoglobin or red blood cells. Red blood cells carry oxygen from the lungs to all parts of the body. Within each of these blood cells is the protein hemoglobin, which combines with the oxygen while in the lungs and then releases it into the tissues as the blood circulates through the body. Characteristic symptoms of anemia are lightheadedness, rapid heartbeat, difficulty breathing, and faintness. The anemic person may experience palpitations, because the heart is attempting to compensate for the lower levels of oxygen by pumping blood faster than normal. The diagnosis of iron deficiency anemia indicates that lower than normal levels of iron in the body limit the production of hemoglobin. Folic acid anemia and B12 anemia indicate that the body has insufficient amounts of these two essential vitamins, which are required for the production of healthy red blood cells. The inherited disease sickle cell anemia is found almost exclusively among people of African descent. In this condition, the red blood cells contain an abnormal hemoglobin, called hemoglobin S. This leads to deforming of the shape of each cell and thus impeding the smooth flow of blood into smaller vessels. Premature destruction of red blood cells, and anemia, results. A physician should diagnose and treat all forms of anemia.

Pulmonary embolism occurs when a blood clot detaches from the wall of a deep vein, moves through the bloodstream, and becomes lodged in the pulmonary artery close to or within the lungs. This reduces the volume of fresh blood returning to the left side of the heart and may produce sudden chest pain, rapid heart rate (tachycardia), rapid shallow breathing, and coughing up of bright red spit.

A heart attack often involves crushing chest pain as the predominant symptom, as mentioned earlier. Other symptoms can include dizziness, shortness of breath, sweating, chills, nausea and fainting.

Hypoxia means diminished availability of oxygen to the body tissues. It is a symptom of several possible underlying problems, such as altitude sickness or a pulmonary disorder. Symptoms can include difficulty breathing (dyspnea), rapid pulse, fainting and chest pain (angina pectoris).

A Carcinoid tumor, also called a argentaffinoma, is a small yellow growth occurring in the small intestine, appendix, stomach or colon. Carcinoid syndrome develops when a carcinoid tumor produces excess amounts of serotonin, a blood vessel constrictor. Exertion, intense emotion, or food or alcohol intake can trigger symptoms, which include one or more of the following: brief flushing of the neck and face, brief abdominal pain, diarrhea, racing heart (tachycardia), low blood pressure (hypotension), facial puffiness and difficulty breathing (caused by bronchoconstriction). Carcinoid tumors are rare.

Compression neuropathies, such as carpal tunnel syndrome, are disorders caused by some form of compression to localized nerves. Symptoms may include dysesthesia (a tingling or “pins and needles” feeling), similar to that which occurs during hyperventilation.

The symptoms of temporal lobe epilepsy (TLE) are highly variable, but in some cases sufferers experience them only as a sudden attack of immense fear or panic. In 60 percent of the cases, fear is the primary emotion. The patient may also have a feeling of unreality, as though he is far away from his surroundings (derealization), or may feel that his body is strange or dreamlike(depersonalization). Highly charged emotional responses such as these can lead to a misdiagnosis of the problem as a psychologically based one. A distinguishing feature of TLE can be the presence of an aura, a sudden experience that often takes the form of a strange aroma or taste at the moment of fear.

Caffeinism refers to the uncomfortable side effects that can occur with high intake of caffeine from coffee, tea, cola drinks, chocolate, and overthecounter medication such as Excedrin and Anacin. Symptoms include anxiety, irritability, insomnia, headaches, stomach irritation, agitation, increased respiration, rapid heartbeat, and irregular heart rhythm. These side effects can occur with daily consumption between 250 mg to 500 milligrams. Between 20 and 30 percent of Americans consume more than 500 mg of caffeine a day (four to five cups of drip coffee contain a total of over 500 mg). Some panicprone persons are highly sensitive to caffeine, and symptoms can occur from less caffeine intake than the average person. If you experience any of these symptoms, you may wish to review your intake of all forms of caffeine. Use the following lists as a guide.

Amphetamines, whether taken for treatment of depression, for weight control, or illicitly for recreation, can cause severe anxiety to the point of panic. This extreme reaction is also possible with illicit drugs such as cocaine, phencyclidine (PCP), and the hallucinogens (LSD, mescaline). It is possible that these drugs stimulate brain receptors associated with anxiety, making panic attacks more likely. Marijuana causes increased heart rate that can lead to a severe anxiety reaction.

Alcohol withdrawal can produce nervousness, rapid heartbeat, confusion, high blood pressure, and panic as well as other symptoms. Too rapid withdrawal from antidepressants, narcotics, sedatives, barbiturates, benzodiazepines (Valium, Librium, etc.), or beta blockers can cause symptoms such as anxiety, rapid heartbeat, high blood pressure, and panic, especially after longterm use.