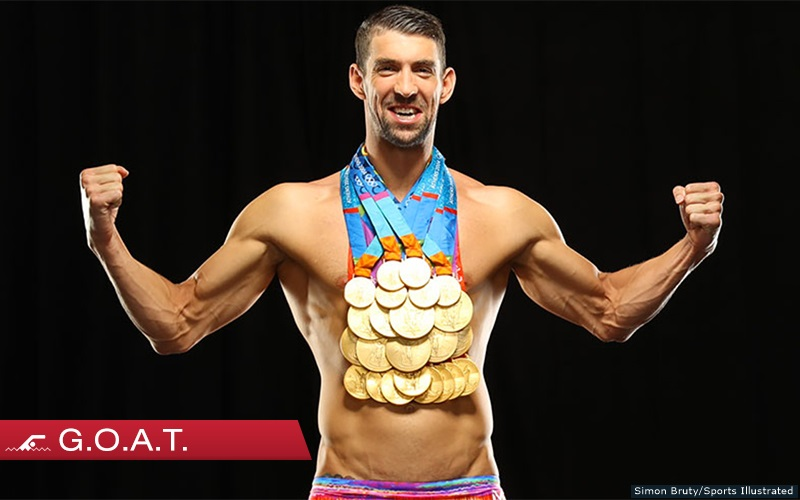 What Michael Phelps can teach us about commitment to the work.

Has Anxiety ever given you permission to “take it easy?”

I’ve said it before: Anxiety is the most cunning of challengers. Aside from all of the typical tricks up its sleeve, Anxiety will set aside special times when it’s okay for you to take a break from the good work you’re doing and slip into your old habits. Maybe you had a long day. Maybe a four-hour Zoom conference call put you in a sour mood. Or maybe with all of the stress related to masks and COVID-19 and the upcoming election…maybe it all feels like a little too much right now.

But take notice if you find yourself “taking it easy” a bit too often. This could very well be your need for certainty, begging you to play hooky today and put the work off until tomorrow (“and tomorrow, and tomorrow,” as Macbeth would say).

Ask Michael Phelps, the most decorated Olympic champion ever, if he would “take it easy” when he was feeling less than stellar on any given training day. Ask his longtime coach Bob Bowman if he ever gave Phelps the day off after a crummy weekend. At the height of his 20-year career (Phelps began competitive swimming at the age of seven), he was in the pool 365 days of the year – yes, even on Christmas, in part because he and Bowman knew that other athletes were taking the day off.

One day, while training a teenage Michael Phelps, Bowman put his star pupil through a rather rigorous training session. “I said, ‘You should be very tired, that’s the hardest practice you’ve ever done,’” the coach recalled. “I’ll never forget. He looked me straight in the eye and said ‘I don’t get tired.’ So I made that my life goal, to see if I could accomplish that.”

Bowman’s job was not to make Phelps comfortable. “I’ve had the driver pick us up late so that he missed dinner one time,” Bowman revealed in an interview during the 2012 London Olympics. “[Before] one meet, he forgot to take his goggles out, and instead of bringing them to him, I just hid them in my pocket.” And as it turns out, despite the sting of the chlorine, Phelps won the race without his goggles.

It’s no surprise that Bowman has a degree in developmental psychology. Some might think it cruel that he once stepped on Phelps’s goggles before a practice, knowing that they would fill with water once he got into the pool; however, cruel as it might have been, that practice prepared him for the 200-meter butterfly race during the 2008 Beijing Olympics, when Phelps’ goggles famously filled with water. Phelps took the gold medal in that race and set a new world record.

As it turns out, bad days are excellent days to practice.

There was a young man who joined me for a two-day treatment group I led in Chicago, and it wasn’t his best weekend, to say the least. He had suffered a back injury years ago that still troubled him, and he was uncomfortable on this particular morning, thanks to an inferior hotel mattress and more city walking than he’d anticipated. He’d slept on the hotel room floor most of the night. Needless to say, he was a bit reluctant to take on any big new challenges.

On each day of these two-day intensives, I send the participants out into the world to seek out ways to generate worry, distress, and discomfort, whether it’s using a public bathroom, touching doorknobs or light switches with bare hands, or impulsively purchasing a new piece of clothing. For this particular participant, the idea of not calling his mother during his lunch break was drumming up a lot of anxiety. When I asked him if he had a plan in place for his lunchtime practice, he sighed heavily and suggested that he “take it easy” today.

Anxiety was giving him a pass.

I can’t force anyone to get out there and practice; it’s up to you to decide if you’re ready to commit to the work. Only you can generate an outcome picture (a mental picture of the values that you’re currently missing from your life) that reminds you what you’re fighting for and gives you the strength and motivation to move forward. What is it that you want badly enough that you’re willing to step up to the challenge?

If you can adopt the attitude of “This is hard, AND I want this,” then you can get through the worst day. If you can make that massive mental shift, then nothing can stop you.

While their friends and relatives sipped cocoa and opened presents on Christmas morning, Michael Phelps and Bob Bowman were at the pool, committing to the repetition, committing to their 359th practice of the year. Bowman’s coaching model isn’t an advocacy for cruelty; it’s a model for the expectation of uncertainty and discomfort. If he could catch Phelps off guard, disrupt his routine, or make him uncomfortable, then he could prepare him for the rigors of Olympic competition. If Phelps could win a race under the most stressful conditions and in the most threatening of situations, then he would be unstoppable.

Bad days expose your vulnerabilities and make you more susceptible to your symptoms. So rather than “taking it easy,” go toward them. Run toward them. Embrace them. After all, your challenger isn’t taking a day off.

Further reading: “Stopping the Noise in Your Head: The New Way to Overcome Anxiety and Worry,” HCI Books, 2016.