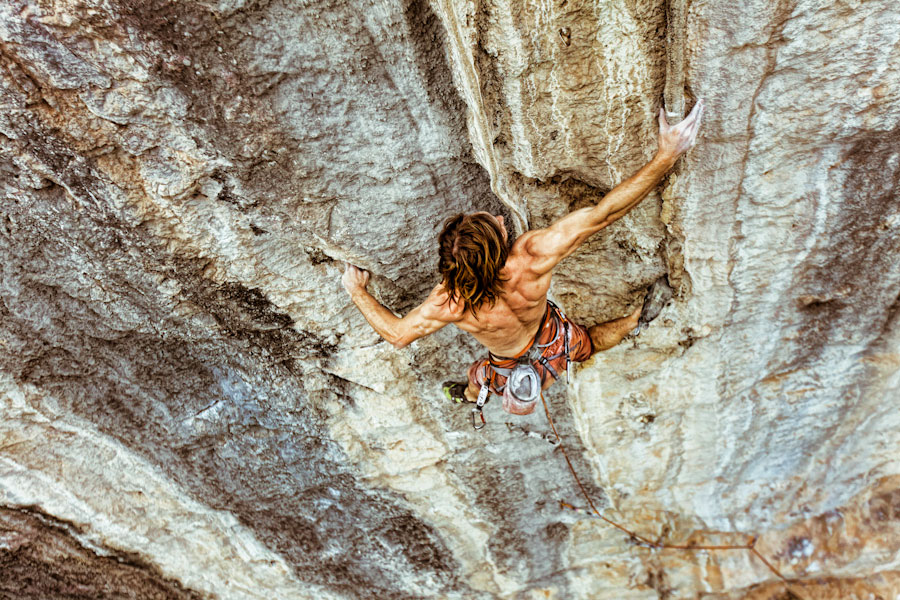 What a no-ropes rock climber can teach us about tackling our anxiety.

If Chris Sharma is worried about anything at this very moment, it’s not the height at which he’s climbing or the three-story free fall into the water below. It’s the water itself, which the locals describe as totalmente congelada—freezing cold—and as much as you might mentally prepare for that moment, you feel it the second your body slaps the surface.

Chris Sharma is shirtless in blood red shorts and signature yellow shoes that, no surprise, he designed himself. He looks down only for a moment, if anything to reassess his line—his own unique path to the top. Beneath him the sea swells. The foam surges on the rocks. He reaches back with his free hand and dips calloused fingers into a mesh bag of chalk hanging from his belt and resumes his climb up the face of the cliff.

Deep-water soloing is a relatively new addition to the sport of climbing. It involves ground-up free soloing (i.e., climbing without ropes) above water, and Sharma is one of its most notable pioneers. Right now he is dangling several dozen feet above the raging Mediterranean Sea, mounting an arch known as Es Pontàs, which stands majestic at the southeastern edge of the Spanish island of Majorca.

Clearly the sport requires Herculean strength and agility, but there’s something acrobatic and ape-like about Sharma’s movements. Looking up, the ascent appears impossible, but Sharma is almost reckless as he scrambles up the arch, tackling a line that has never been accomplished before. He spots a slab of stone emerging from the cliff face above him and grips it between white, calcified fingertips, his legs flailing over the void as they struggle to find anything that might pass for a foothold. For a moment his knees hug the façade, but he’s not where he wants to be. His tendons strain to maintain the hold.

He eyes his salvation: a clean rock edge about two arms’ length to the right. He recalibrates in an instant. Sharma thrusts himself in that direction but misses the intended mark and, without warning, plummets 40 feet into the turbulent sea surging beneath him

At the age of 33, Sharma knows a great deal about falling down and getting back up. A modern-day nomad, he hops from one rock to the next, always in search of the next big challenge. His enjoyment comes not so much from reaching the peak as it does from discovery, exploration, and the unknown: “There [are] a lot of people that maybe focus too much on getting to the top,” he says. “They just want to get to the top and have that success, which is too bad, because so much of it takes place in the process of working on it. That’s the whole life of it.”

Once Sharma has taken on a new project, he doesn’t plan his course and train elsewhere. He trains on the rock itself. “I’m not the type who can train, be doing something now so that in three months I’ll be strong enough to try a route. I just go try a line a million times. The training occurs on the route.” For Sharma, a crucial part of the experience is the falling down, learning from his falls, and returning to the rock face with new information and a reinforced motivation. It’s the failures and the repetition that make him the athlete that he is.

Consider Sharma’s words as guidance: The training occurs on the route. Get as close as you can, as soon as you can, to the event you fear. Practice your skills there. “When you first try [the climb], you can’t do all the movements, but then you start piecing it together and figuring it out.” His projects are psychological, he says, demanding not only his physical best but also supreme focus and motivation and a willingness to confront the unknown. He’s engaged in a challenge that requires great tactical skill, and he is winning because his overall strategy includes principles we can all embrace:

He steps forward and takes on the challenge.
He believes he has the ability to master the rock.
He is willing to be awkward and clumsy as he learns.
He expects he will be uncomfortable.
He’s willing to experience dramatic failure on his way to success.
Even though he could lose something of great value (his health, his life), once he has decided on a climb, he doesn’t attend to that worry while he’s engaged in the work.

I am hard-pressed to imagine that Anxiety will continue to dominate you if you learn to respond to your worry and fear in the same manner Sharma responds to the rock. You don’t have to be physically accomplished like Sharma to win this challenge. But you do have to take on a similar attitude and learn to step toward the challenge.