Winning the Battle Inside Your Mind 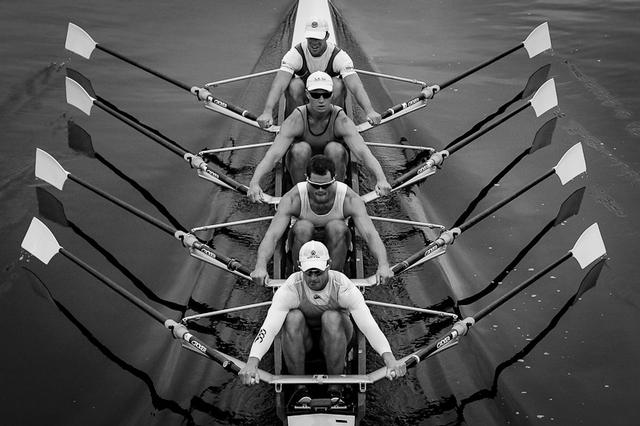 Sometimes the biggest competition is happening under the surface

It’s 35 degrees on a crisp Saturday morning, and we’re about to practice two 3,000-meter races. I’m sitting in the three-seat of our beautiful new quadruple scull—a sleek racing boat with four rowers. We are racing against an identical boat, evenly matched in strength and skill. In the first race we finish within half a boat length of each other. We spin the boats and prepare for the second race.

We are the crew of CHAOS Rowing. Our ages range from about 30 years on up to me, the elder, in my early 60s. Our objective is to move the boat as far as possible with each stroke in the most efficient manner. The sport is physically and rhythmically intense in a very precise way. And when all the rowers and the boat can row as one, it’s thrilling. All of our continued work on technique comes down to this: crossing the finish line ahead of the other boat.

The second race begins. We row steady and clean. At about 500 meters, our bowman Richard yells out a new command. “Up two, in two.” (Increase the stroke rate per minute by two strokes after the next two strokes.) We’re rowing at 26 strokes per minute, and we are focusing our minds and bodies on the efficiency and power needed to propel our boat into the lead. From behind us we hear Richard’s voice again from the bow seat. “In two, power-ten.” (After these two strokes, exert all the power you can muster into these next ten strokes.) “One…two! Give me legs!” Rapid. Intense. Power. All as one. I make an audible “huh” at the end of each exhale, a sound that shows up on its own as I engage the oar with full exertion.

My force has exceeded my lung capacity, and now I am in a state of panic. Both of my shirts are zipped all the way up to cover my neck. What was outside of my awareness only moments before is now quite clear: These zippered shirts are restricting my airway as my muscles are now demanding more oxygen. But there’s nothing I can do about that. Each of my hands must remain wrapped around the handle of its oar. I’m freaked. We’re rowing at a furious intensity, and my inner dialogue is a terse, two-way altercation that sounds like this:

At this moment, I’m afraid that if I continue rowing… Well, I don’t quite know what will happen. I’m screaming in my head, “Now! Say ‘way enough’ now!” But, geez, I really don’t want to do that. No one has ever called “way enough” because they couldn’t catch their breath. I don’t want to be the first. I’d be so embarrassed. We have committed ourselves to win this race. We row as though this is the biggest race of our lives. I don’t want to be the one that spoils this.

I hear Richard call, “Thirty more strokes!” I’m phoning it in now. I give zero power to my legs because any more exertion will put me further into an anaerobic state. I’m solely trying to move my legs, my back, and my arms in sync with the other three in the boat. “Twenty more strokes!”

We just edge out the other boat as the race ends. We shift to paddle mode, slowing the stroke rate, taking the pressure off our legs. Now that it’s over, I’m glad that my executive voice won the day, because I did get through it. I didn’t let anyone down. I didn’t have to sheepishly admit that I’m not as aerobically fit as I would like to be.

And here’s the irony: Despite my sense that I was losing control, that morning our boat set the club record for the fastest 3,000-meter row.

We’ve all gone through an experience like this when we’re really afraid. We’re totally alert to our present experience and simultaneously predicting a dreadful future. I struggled because I wasn’t sure if I could make it; I wasn’t even sure that the “keep going” message was the best decision. If I had passed out, it would have been the wrong decision.

Yes, I was part of a competition. But the biggest competition was the battle inside my mind. As I’m sure you already know, negative self-talk can paralyze any of us. That’s what you and I need to work on: how to win these internal battles.